The Space (heavens) and matter (earth) and called light into being.   Note, the light in the glass transforms the darkness.  Where there is light there is no darkness.  The light comes forth from the darkness and we can see the beloved sphere of the earth.  And how can we describe the light? Nobody, even today, can tellus what light is.  We know what light does, but not what light is.  It is one of the most mysterious entities in the universe.  IN physics it has become the new absolute.  As such, it is at the heart of the famous equation E=mc2.
"At that time, when there was no time, or when the world began, it began in this wise, that heaven and earth were first created by God out of nothing in an unformed condition, not beautified as they now are.  Hoverer, heaven and earth did not lie unimproved this way for a long time, but immediately on the first day the beginning was made to adorn them with light.”  Martin Luther 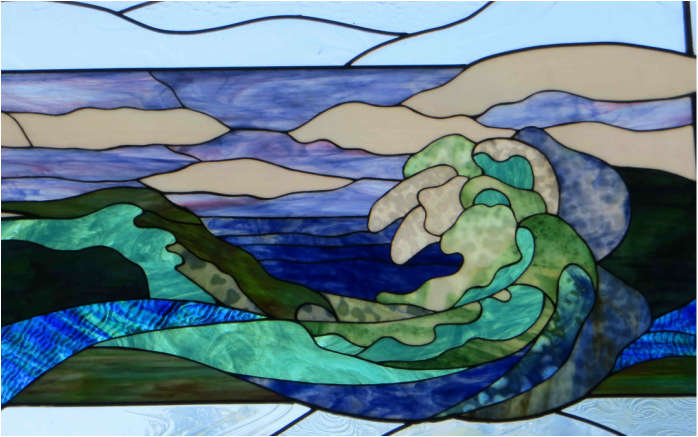 And God said, "Let there be an expanse between the waters to separate water from water." So God made the expanse and separated the water under the expanse from the water above it. And it was so. God called the expanse "sky." And there was evening, and there was morning — the second day.  Genesis 1:6-8
Our second window depicts the waters above and the waters below in a simple way.  The vapory waters above the earth and the waters in the ocean alone contain 97% of earth’s supply of water, covering 71% of the earth’s surface.   And for that matter clouds hold tones of water.
These these waters above and below are like a canvas being prepared to receive something, but what?
The Hebrew noun "ragia" has been translated as "expanse" in the New International Version and "firmament" in the King James Version of the Bible.
What does the Hebrew word actually mean? The Hebrew noun raqia is derived from the verb raqiya, which means “to spread abroad, stamp, or stretch.” This word is used in the Old Testament in several places for the stamping out of metal into a sheet. Gold is a good example of this process. Gold is malleable and people use a hammer or other tool to flatten and stretch it into very thin sheets (e.g., Numbers 8:4). However, we must remember that the context always determines the meaning of a word, not just the etymology of the word or how it may be used in other verses.
So, we ask ourselves, why did the author use “ragiya” to describe the expanse? What property did the author intend to be understood by the word raqiya? It is possible that the author intended to get across the solid nature of the expanse.  But, it is more likely the author was describing the stretched out nature of the raqiya rather than its hardness.  This understanding is consistent with the terminology of many other verses, such as Psalm 104:2 and Isaiah 40:22, which speak of the stretching out of the heavens.
Therefore, it was our purpose in the stained glass of day two to look out over the ocean’s expanse with its movement of waves and to look above creation’s horizon to the water-filled clouds above.

Day Three- "Let water be gathered and dry ground appear. . .. let the land produce vegetation. . . according to there kind.

Note the dividing of the land and waters as a stream flows down the center of the stained glass with the dry ground on each side.   At tree prominently presents the fruit God called it to bear.  That is the way of fruit.  It simply is presented coming forth from the tree planted into the nutritious soil.   Everything is ordered.  Flowers produce flowers not birds or snails.  The seed is each unique to its on kind.  An apple seed will not produce a melon.        God has set reproductive limits for the plants, there is no suggestion here of any kind of "Evolution" of one kind to another.  Only within the kind will there be change based on the genetic information in the seed.   In other words no added information comes about through a process of chance or even natural selection.  Varieties within the plant kingdom  come about through an exchange of information, never by an addition of genetic information.

A wide range of variations are possible so long as they lie latent in the genes, but no visible variation an occur outside the combination of existing genes within a given kind.  Man, of course has tinkered, with the genetic structure of various organisms in the hope of producing artificial evolution.  Nearly all the mutation produced have proved harmful, lethal, or useless to the original organism.    The verdict remains the same: “After its kind.”

Israel's pagan neighbors believed all kinds of myths about the heavens, the earth, and the seas; but Moses made it clear that Elohim, the one true God, was Lord of them all. For the first time, God said that what He had done was "good" (v. 10). 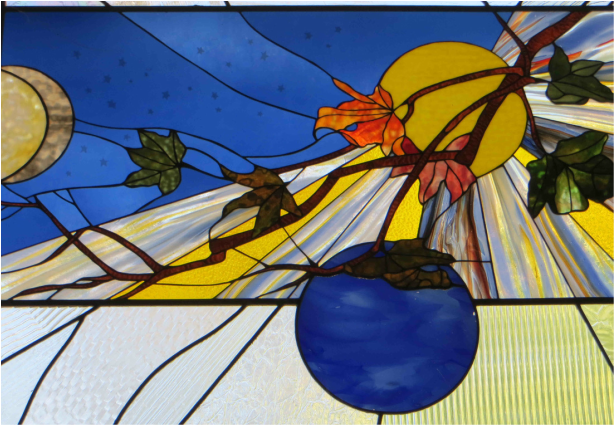 At first look this stained glass window seems somewhat strange as it depicts the filing of the space created on the first day with sun, stars and planets, for in the midst of the glass is a vine with leaves.   Take a closer look at the leaves and you will see in them the passing of time as leaves sprout, unfold, display the colors of fall and eventually wither.   The artist wanted to show effect of the two “great lights” on the changing of the seasons and the passing of the days.  The sun at just the right distance from the earth so as to warm it and not harm it.  The turning of one day into the next as the sun shines upon the turning earth.  The moon shedding reflected light, marks for us the seasons in monthly order.

The Bible is not a handbook of astronomy or of any science.  However, each time the Spirit of God refers to a subject that can be scientifically investigated, He does so with unerring precision.  For example, Moses declares “God has made two great lights, the greater to rule the day, and the lesser to rule the night.”  How did he know that the sun was bigger than the moon?  Ordinary observation would lead to the opposite conclusion.  We have all seen the giant harvest moon dominating the night sky.  We have never seen the sun look so large.   Also consider the phrase, “He made the stars also.”  God dismisses it all as of little account.  Clearly, God is more interested in people than in planets, more interested in souls than stars.

DAY FIVE:  Then God said, "Let the waters swarm with fish and other life. Let the skies be filled with birds of every kind . . .  be fruitful and multiply. Let the fish fill the seas, and let the birds multiply on the earth." 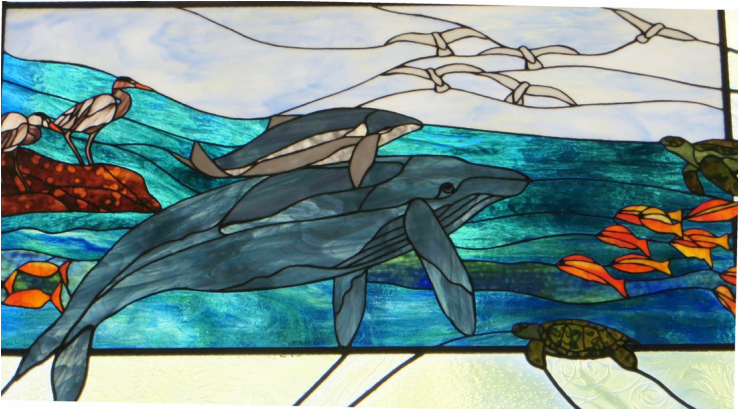 God begins to fill His water spaces… the oceans and rivers with sea creatures of various sizes and shapes.  The whale, a sea creature along with the sea turtle and schools of fish.  Also, God fills the watery spaces above with the birds of the air.
The whale in the glass makes me happy as it freely jumps for joy in the ocean God made for it.  I think part of the reason for my happiness in seeing it is that my daughter drew it in the original picture.  God created the great creatures of the sea, even the whale.   Atheistic evolutionists claim the whale was once a creature like a cow that having come out of the sea earlier returned with a slowly changing tail.  Some tale that is indeed!
Atheistic evolutionists, declare remnants of a time past as they point to alleged “vestigial” (useless) pelvis bones of a whale on its underside.  The evolutionists proclaim those bones are remnants of what were  once legs which shrank being no longer needed as the whale returned from land to the sea.  How silly indeed!  The truth of the matter is those so called useless pelvis bones are necessary for the reproduction of little whales.  All kinds of creatures live in the sea and so in the glass we see a turtle and schools of fish.  God filled the space of the sea with a menagerie of Jellyfish, oysters, lobsters, worms, snails, sponges oh my!  And then he filled the space above with the birds of the air.   How amazing the structure of the birds with bones as light as a feather.  The feathers uniquely designed for flight.
It is beyond credible to think that finely designed feathers and uniquely formed-for-flight bones could have evolved from an earth bound wingless creature .   Chance or accident cannot begin to explain the wonder of those creatures that fly in the sky or swim in the sea.

DAY SIX:  Then God said, "Let the earth produce every sort of animal, each producing offspring of the same kind—livestock, small animals that scurry along the ground, and wild animals. . . . Let us make human beings in our image, to be like ourselves. They will reign over the fish in the sea, the birds in the sky, the livestock, all the wild  . . . So God created human beings in His own image. In the image of God He created them; male and female . . ." 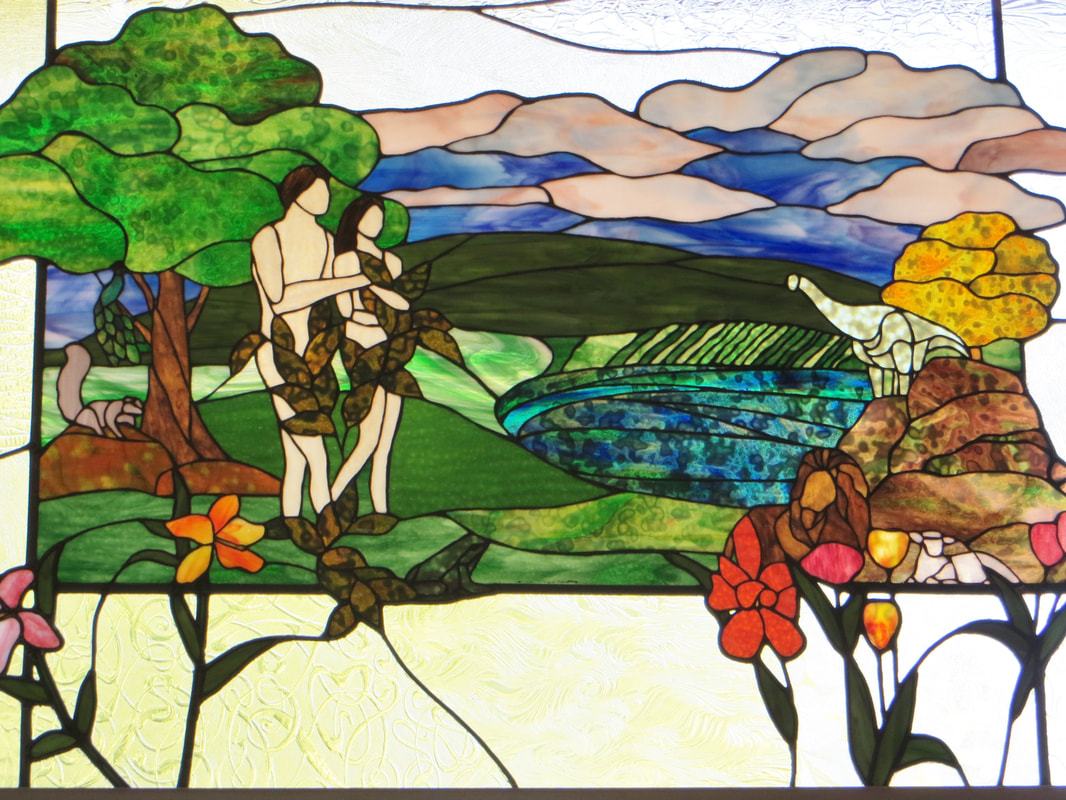